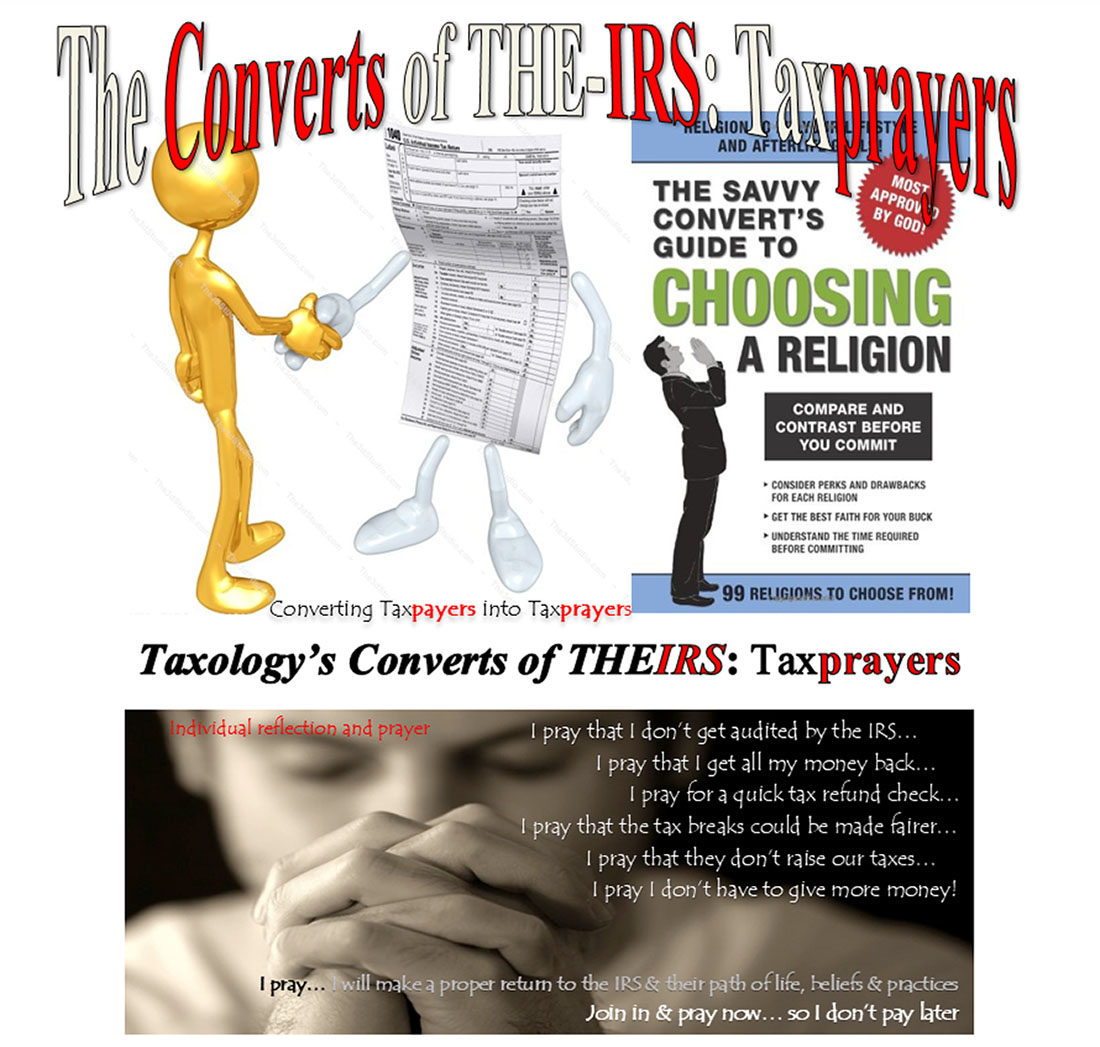 Plaintiff [believes] or [conscience] dictates that The Converts of THE-IRS can be any person converted by the IRS to become Taxprayers – a government creature, creation & construct of THEIRS. Taxology’s religious conversion is about one’s own salvation or confession when you make a proper return to the IRS & their path of life, beliefs & practices written in [THE CODE] & [THE WORDS] of THEIRS.

THE IRS’ Creed of Taxology: “Our core values guide our path to achieving our vision.”
Taxology is a powerful religion of reality!

[THE WORDS] of THEIRS that defined:

(a) When used in this title, where not otherwise distinctly expressed or manifestly incompatible with the intent thereof-

The term “person” shall be construed to mean and include an individual, a trust, estate, partnership, association, company or corporation.

The term “taxpayer” means any person subject to any internal revenue tax.

(A) a citizen or resident of the United States,
(B) a domestic partnership,
(C) a domestic corporation,
(D) any estate (other than a foreign estate, within the meaning of paragraph (31)), and
(E) any trust if-

However (30) “United States person” is not defined as “any person”

Furthermore (14) Taxpayer is “any person subject to any internal revenue tax” not any person or as someone who is “liable for” and “subject to” the income tax laws as set forth in Internal Revenue Code.

Note a person “subject to” is not the same as being “liable for” an internal revenue tax.

The word “taxpayer” is defined in 26 U.S.C. §7701(a)(14) “subject to” any internal revenue tax NOT “subject to” the income tax laws written in Internal Revenue Code, Subtitle A.

The word “taxpayer” is defined in 26 U.S.C. §1313 as someone who is “subject to” a tax under the applicable revenue law.

(a) When used in this title, where not otherwise distinctly expressed or manifestly incompatible with the intent thereof—

The term ”taxpayer” means any person subject to any internal revenue tax.

(1) Section 1 of the Code imposes an income tax on the income of every individual who is a citizen or resident of the United States and, to the extent provided by section 871(b) or 877(b), on the income of a nonresident alien individual.

What “U.S. citizens” and “U.S. residents” share in common is a domicile on federal territory that is no part of the exclusive jurisdiction of any state of the Union.  Collectively, they are called “U.S. persons” as defined in 26 U.S.C. §7701(a)(30).  Remember:

“U.S. person=domicile or residence on federal territory and not any state of the Union”

The “United States” they mean in the term “U.S. citizen” is defined as federal territories and possessions in 26 U.S.C. §7701(a)(9) and (a)(10)  and 4 U.S.C. §110(d) and nowhere includes any state of the Union because they are sovereign and foreign in respect to the federal government.  In that sense, income taxes are a franchise tax associated with the domicile/protection franchise.